The Year of Du Bois: A Midway Political Assessment

The Year of Du Bois: A Political Assessment

​2018, the year of William Edward Burghardt Du Bois, has taken root in the lives of the people of Philadelphia. As we enter into the second half of the Year of Du Bois, we reflect on all that we have accomplished, learned, and gained in the last six months.

The Year of Du Bois has been an all embracing movement that has united people from many different religions and points of view. We estimate that upwards of a hundred thousand people have been engaged in one way or another in the thought of Du Bois. Those ideas central to Du Bois’s thinking--peace, racial and social justice, and anticolonialism, have been brought into discussion and debate.

The Year of Du Bois is a framework for the conduct of political education and the discussion of ideas among broad sections of the population. In thirteen sites around the city people entered into intensive reading of Du Bois’s works through Philadelphia Reads Du Bois. This campaign demonstrated people’s desire to know the truth about their lives and their conditions. People were welcomed regardless of their level of education or literacy. The discussions were not separated from the day to day issues confronting people.

On February 1st, 2018, the City Council of Philadelphia unanimously voted to declare 2018 the Year of Du Bois. Councilwoman Helen Gym, public education advocate, introduced the resolution and it was strongly supported by Council President Darrell Clarke and longtime community and labor supporter Councilwoman Jannie Blackwell who cited the legacy of her husband, the late Lucien Blackwell, in championing the thought of Du Bois. Members of the organizing committee of the Year of Du Bois testified to the importance of Du Bois’s thought at this time of crisis. The resolution was part of a year of events, reading groups, and political and intellectual engagement with the people of Philadelphia.

The literacy and ideological campaign Philadelphia Reads Du Bois is the foundation of the Year of Du Bois. Across the City and beyond, people gather twice a month and collectively study the works of Du Bois. The Free Library of Philadelphia, Church of the Advocate, Mother Bethel AME Church, the Christian Association, 1199C Union Hall, Jubilee Elementary School, Temple University, Philadelphia Senior Center, Wooden Shoe Bookstore, La Salle University, Philadelphia Liberation Center, and Cornell University hosted readings and discussions about the works of Du Bois and how they are relevant to today’s problems. Several of these locations are community institutions that are the foundation of the social and political life of the black and poor community in Philadelphia. The readings explored the breadth and depth of Du Bois’s thought as a scholar, scientist, freedom fighter, and fighter for peace, from his more known books such as The Souls of Black Folk and The Philadelphia Negro, to his lesser known but equally important works like Darkwater, The World and Africa, The Dark Princess, Black Reconstruction, The Education of Black People,  and John Brown.

WURD (900 AM/96.1 FM), Philadelphia’s black owned radio station, plays a central role in the Year of Du Bois. Weekly readings of Du Bois take place every Wednesday at 9:30 AM. The words of Du Bois reach tens of thousands of listeners across Philadelphia and the nation. This constitutes a unique platform for the education of the community. The topics discussed on air have included Du Bois’s concept of the truth, the role of Africa in history and today’s politics, the role of women in the black struggle for freedom, art and culture in the fight for freedom, the music of Aretha Franklin viewed from the lens of W.E.B. Du Bois’s philosophy of art, and the people’s right to live in peace. Callers have phoned in to engage in conversation about how our history of struggle is the basis upon which we must build a new future.

In addition to Philadelphia Reads Du Bois, the Year of Du Bois has been commemorated by eight symposia, with two more to come.

On February 2nd, WURD and the Barnes Foundation hosted a panel discussion entitled “The Philadelphia Negro: Past & Present” featuring scholars Anthony Monteiro, Imani Perry, John Jackson, and Kali Nicole Gross. It centered upon Du Bois’s sociology and the function of the knowledge in the uplift of the community.

On February 23rd and 24th, 2018, the people of Philadelphia celebrated Du Bois’s birthday with a symposium entitled "Pan Africa and Pan Asia: A World United for Humanity". Pan Africa Pan Asia refers to the Du Boisian concept of the darker nations united for a world free from exploitation and war. It started with a movie screening of the film Finally Got the News about the color line in revolutionary labor struggles and a message from renowned intellectual and political prisoner Mumia Abu Jamal. This was followed by a series of panel discussions on Black Reconstruction, The World and Africa, and the novel The Dark Princess. The event closed with a cultural celebration which brought to life the vision of Pan Africa and Pan Asia with dances, songs, and musical performances from the traditions of Afro-America, India, Latin America and West and East Africa. There were addresses by Councilwoman Helen Gym, Church of the Advocate Pastor Renee McKenzie, and CEO of WURD Sarah Lomax Reese.

The next Symposium was on the subject of Peace entitled “Blessed are the Peacemakers” at the historic Mother Bethel AME Church pastored by Reverend Mark Tyler. It commemorated the lives of Paul Robeson, Martin Luther King, and W.E.B. Du Bois. These men were fighters for a positive peace, which means not the absence of conflict, but the presence of justice. The event was opened by Reverend Harry Taylor, who blessed all those who fight for justice with the grace of God. The event included a series of screenings of speeches and songs, including Paul Robeson’s testimony at the House Un-American Activities Committee (HUAC), Robeson’s rendition of the Chinese National Anthem, and Martin Luther King’s Speech “For a Time to Break Silence: Why I oppose the War in Vietnam”. The audience was moved by performances of Paul Robeson’s and Alice Coltrane’s music. The event ended with a discussion on the path for the future. The symposium took a stand for Peace everywhere in times of escalating xenophobia and war hysteria.

The third symposium “The Struggle for Peace & The Emancipation of the Women of the Dark Races” took place on July 6th and 7th at the Church of the Advocate. It celebrated and studied the essential role and leadership of women in the struggle for peace, specifically the contributions of Nina Simone, Coretta Scott King, Shirley Graham Du Bois, Winnie Mandela, and Indira Gandhi. The event understood women’s liberation not as the freedom to occupy the role of the oppressor, but the freedom to change society and become a new human being in the process. The event featured movie screenings, readings, and discussions about the ties between women’s freedom and the freedom for all humanity.

On May 23rd students and professors at Drexel University organized a seminar “The Color Line in the 21st Century: Why W.E.B. Du Bois Still Matters”. On May 29th, renowned Indian folk musician Prahlad Singh Tipaniya performed at the Church of the Advocate and honored the history of unity between the African American and Indian traditions for freedom and peace. On August 11, Temple Students for Justice in Palestine organized "Palestine & Black America: A Strategy for Liberation" which discussed the readings of Huey P Newton, Ahmad Sa’adat, and Du Bois’s framework of intercivilizational unity as a basis for anti-colonial struggle. On March 27th, the Camden City Council led by the African American Commission of the City of Camden and Camden Reads Du Bois passed a resolution commending the life and achievements of W.E.B. Du Bois at Camden City Hall. Camden Councilman Angel Fuentes read City of Council's Commendation of Du Bois and spoke of how Du Bois's work empowers him, and how Du Bois would have stood with the Puerto Rican people were he alive today.

In addition to the events organized, the Year of Du Bois has reached thousands of viewers online through the website www.yearofdubois.org, the Facebook Page of the Saturday Free School, and our Youtube Channel Free School Media which is an archive for the speeches, discussions, and conferences that have taken place over the year.

The Year of Du Bois has not yet come to close. The Year of Du Bois will continue its significant work of political education of the people for the struggle for peace in the coming months. Philadelphia Reads Du Bois, which has been on hiatus since July, will resume in the fourth week of September. Two more symposiums will be held on the topics of Du Bois and the American Working Class on October 26th-27th and Du Bois, Robeson, Baldwin, and Gandhi on civilization on February 22nd and 23rd. A symposium will also be held in Camden, NJ on October 21st with the Unitarian Universalist Church on Du Bois’s work for peace and Afro Asian Solidarity. The Unitarian Universalist Church invited Du Bois to speak during the height of McCarthyite repression.

As we reflect on the good work done so far, we thank the institutions of the black and poor community without which this year would not have been possible.

What we have learned thus far is that people recognize the indispensability of the struggle for world peace to the liberation of the oppressed and the advancement of humanity. We therefore going forward commit ourselves to elevate peace in the thinking, discussion, programs, and strategies of the people. We also have learned that the people want unity and truth. Finally, like all ideas whose time has come, the ideas of Du Bois constitute a powerful force for freedom. Du Bois will therefore undoubtedly play an important role in the 21st century. 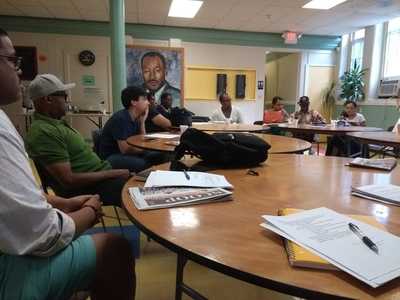 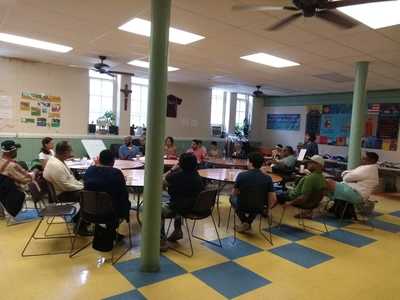 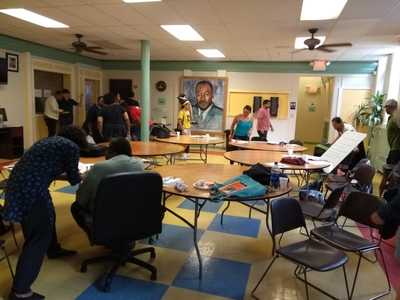 Images from the fourth facilitator's meeting for Philadelphia Reads Du Bois on September 15, 2018